Accueil » Actus » A monumental sculpture in honor of the English archers, died for Brittany July 28, 1488!

A monumental sculpture in honor of the English archers, died for Brittany July 28, 1488! 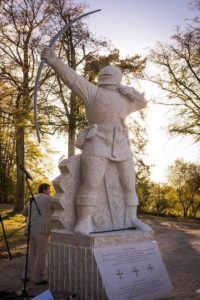 On Tuesday 25th September 2018, took place at the castle of the Giraudais, North of battlefield of Saint Aubin of the Cormier and fieldwork MAB Koad Sav Pell, his commemorative site, the inauguration of a monumental sculpture in granite of 5.20 m height carved out of a block of 20 tons originally. This monumental sculpture represents an English bowman of 1488, in tribute to the 440 English archers, who came from the Isle of Wight under command of Sir Edward Woodville « Lord Scales », and died here for defending the sovereignty and independence of Brittany on July 28th 1488, 530 years ago.

The owners of the castle of the Giraudais, Jerome and Laurence Jacquet, made this command to Marc Simon nearly 18 months… Then, it took the sculptor Marc Simon, (who we owed already and between other sculptures the portrait of Anne of Brittany on the field of MAB Koad Sav Pell), 14 months of work, two studies, six models and nearly 700 hours of cut. On its base the English archer of stone measuring 3 m, and his bow in granite (exceptional technical prowess), describes a portion of circle of 3,40 m. « this sculpture has to remind visitors that the Giraudais lands experienced the battle of Saint-Aubin-du-Cormier in 1488. « Considered as crucial by the loss of independence of Brittany, the battle has involved a few hundred English archers who strengthen the army of the Duke of Brittany », explains Jérôme Jacquet.

You should also know that the remains of the English archers, who seem to have had a « special treatment » on the part of the French, were buried a few meters away, at the corner of the wood, based on oral information which went through five centuries, thanks to a local family already there from the time of the battle… and named by Arthur Le Moine De La Borderie in his monumental history of Brittany. It’s his last descendant custodian who showed me exactly the place in 2001, before dying a few years later. « The archer is a man of the 15th century, its size was increased to be visible from a distance. It is ironclad, helmeted and kicked. He wears a coat and has a pouch to store his arrows. He is represented down visor. « We, Jerome and myself, preferred the image of an anonymous fighter, symbol of the whole of the English archers, an unknown soldier somehow, to the more universal » says the sculptor Marc Simon. The inauguration took place in front of nearly 300 guests, several local officials, including the president of the administrative region of Brittany, Loig Chesnay-Girard, as president of the community of common Cormier – Liffré, the Mayor of Mézières sur Couesnon Olivier Barbette, the Mayor of Gosné Véronique Lepannetier Ruffault and the Mayor of Saint Aubin du Cormier Jerome Begasse. The first physical and public mention of the presence of the English archers is on a plate from the monument to the Britons erected in 1988 by the Koun Breizh association more to the South, at the level of the French troops, and by the roadside. An error occured: the Commander of the archers of the island Wight was Sir Edward Woodville, and not Talbot, another historic caracter from an older battle. The second physical and public mention of the presence of the English archers at Saint Aubin du Cormier, and dead there, is located on the Isle of Wight itself, on a plaque installed then inaugurated on July 28th 2009 by the « English Heritage » at the Museum of the Castle of Carisbrook on the Isle of Wight, in memory of Sir Edward Woodville, Duke of Scales and Lord of Wight, and his 440 archers died at St Aubin of the Cormier in 1488, as well as the young Diccon Cheke, the only survivor of the massacre, the only English archer survivor. It seems he was saved to tell the tragedy back on his island! Plaque reads: « IN MEMORIAM SIR EDWARD WOODVILLE and the 440 gallant men of the Island Who died at the battle of St Aubin, July 28th 1488. And to Diccon Cheke, sole survivor of the massacre, who returned with the story. « Requiescat in Pace ». The English Heritage honors the archers of Wight who died in Saint – Aubin du Cormier in 1488: see site

Marc Simon’s English archer at the Giraudais chateau is to my knowledge the third physical and public mention of the presence of the English archers to Saint Aubin of the Cormier in 1488. On the base of the monumental sculpture, Jérôme Jacquet did write this text in french and English: « Archers of Wight who died away from home, hadn’t received your triumphal arches. You lie here since that fateful July 28th 1488 surrounded by your brothers of weapons and enemies, you have learned since to make peace. May you brave archers inspire our living. Soldier of stone be the witness of our belated recognition. » We should also remember that with the English archers, several soldiers of other nations were present on the side of breton: 800 (Germans and Flemings), Germanic 3500 Basques and Gascons Castilians. And on the french side: 5000 Swiss, and Genoese and Neapolitans. Whole of Western Europe was represented in this major battle of the end of the middle age, with nearly 30,000 men in arms. 7 500 men died… 6000 Breton and allies, 1500 french and allies. This battle sounded the death knell of Breton independence, which was officially lost after a time of rebirth, 44 years later in 1532. In comparison Omaha Beach, called « bloody Omaha », has seen the death of 1000 GIs and 2,000 injured and missing in the day of June 6th 1944… and at the battle of Saint-Aubin du Cormier, 7 500 dead… It is true that the french killed all the wounded. All this is well worth a few monuments and we can bet that it’s not over. A tribute to these men who fell there for Brittany! 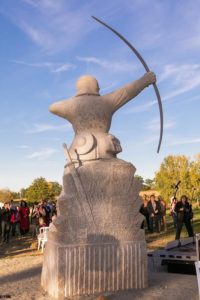